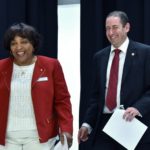 “My work on the school board is something I am called to do. I believe in our children’s future and in providing them the best schools possible so they can meet their potential,” said Bryant. “I’ve served the community for nearly 25 years as a school board member and I won’t stop until I can say that South Fulton is achieving at its highest academic level.”

President Bryant joined the school board in 1993 and begins her seventh term of office this month after being reelected to a four-year term in November. She represents areas in Chattahoochee Hills, College Park, Fairburn, Palmetto, Union City and southwest Atlanta, and is a former teacher, PTA president, local school advisory committee chair, and chair of the Superintendent’s Advisory Committee. In addition, Bryant has more than 20 years of experience with the Georgia probations/corrections department.

Vice President McCain was first elected to the school board in 2010 and is two years into her second four-year term. She represents areas inJohns Creek and Alpharetta. Before serving on the school board, she advocated for children and public education for more than 12 years as a member of local school advisory councils and PTAs in her children’s schools. During her time on the school board, McCain has promoted the efficient and conservative use of taxpayer dollars and the increased accountability of school system stakeholders.

In addition to the officer elections, Gail Dean (District 3) began her fifth term of office today and Katha Stuart (District 1) began her first full term after serving the unexpired term of retired member Linda Schultz. The members were elected to four-year terms in November.