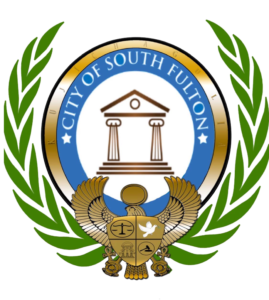 In a surprise move the City Council scraps the placeholder seal used for the Inauguration for a new one. The 6-1 vote came about during the August 22 Council Meeting. The only no vote came from Mayor Pro Tem Catherine Rowell, District 1. The resolution didn’t provide insight to why the seal is being replaced at this time.

“The City of South Fulton never adopted an official seal. The seal that you may be referring to was offered as a working seal to use or adopt by the transition team, and during our stagnate period we were ultimately billed for it’s temporary use”, stated District 7 Councilman Mark Baker the sponsor of the resolution in a written Q&A.

Having worked closely with the Inaugural and knowing the designer. The original seal was designed as part of a package of items specifically for the Inauguration. The City ultimately paid $1,575 for the design of the seal, the Inaugural program, option for collateral material including letterhead and business cards. Additionally, the cost included changing the City name when it took place.

A number of citizens have expressed disappointment, “While I am a devout Christian I want to make certain the city doesn’t set itself up for a rash of litigation because of the all the religious symbolism. I see the dove in the crest that I suppose is also a religious symbol, symbolizing the Holy Spirit. How did they couch the presentation for this to pass?”, stated Benny Crane, former Mayoral Candidate.

The design is striking in that it uses an overt religious symbol of the Hawk, orb and Ankh commonly associated with the Egyptian Sun god Ra, a powerful deity and central god in the Egyptian pantheon. The religious symbolisms breach the separation of church and state doctrine we have grown accustom to.

“I think it looks unprofessional and amateurish. A Communication Director was just hired they should have let her develop a plan to implement a new seal with citizens input just as they are doing with the new city name. I am very disappointed that this seal passed and I let my representative know my sentiment.”, says LaShandra Little.

In a Q&A email about whether there was citizen involvement Council Member Baker wrote, “Yes, there was citizen input…As the District 7 Councilman I circulated well over 10 distinctly unique prototypes of prospective City Seals via my District 7 2.5 Newsletter, the “Nextdoor App” and with all the members of council who received all the proposed possibilities. Based on the feedback received, the final draft was viewed by and presented to the Mayor on Friday August 4, 2017.  Ultimately the seal was disseminated to council and placed on the agenda for the Tuesday August 22, 2017 council meeting.”

“I personally do not have a problem with the symbol of the Ankh.  The challenge is when a government uses religious symbols or Egyptology symbols that lend themselves to be misconstrued by what we stand for. This isn’t just with the seal. We need to tread cautiously in all decisions as a new city. Too many people are looking for our mistakes and will make a mountain out of a molehill because they can,  because we left the door open for them to. Let’s not leave ourselves open for exposure on too many fronts. Looking at the picture above, that would include copyrighted infringement,” said Darris Rollins former District 3 candidate.

Corey Reeves, former District 5 candidate says he was not consulted said, “It has some undertones but I think its a seal the city can live with, however my concern is with the naming of a new city will the city have to go back to the drawing board for a new design to fit the new image of the City’s name.”

When asked via email Detrius Jones, former District 4 candidate wrote, “Love it! Is there any room for a motto?”

Council Member Baker wrote the following in response to what it all means. “Please note the surrounding city seals and note that the current seal for Fulton County is a tree…just a tree.  Our Seal represents the concepts aligned in our mission to provide exceptional customer service that sustains a safe inclusive, innovative economically vibrant city!  The most general theme of the seal is derived from the sheer self-determination of the people of our city and the 10 year mission to define ourselves, name ourselves, create for ourselves and ultimately speak for ourselves. The symbol of the bird in flight carrying the symbols of life to new heights of this vibrant city is culminated by the sun.  The dove represents our freedom and the gavel representing order that will keep us safe.  The scale represents the balance of equity we aim to provide for our citizens in our vastly different areas, and the blank bannered pillars represents our future generations and their unchartered banners to write their own narratives.  The pillars necessary for support and stability needed to sustain ourselves, surrounded by the olive branches of ancient Greece that symbolizes inclusion and our willingness to service and work collectively with everyone regardless of the racial, cultural, or economical variations of the nearly 100 k people in the city with respect. “

“I actually do not care for the seal and I feel it will cause the city additional monies because it will have to replace the seal that they just spent a few thousand dollars on code enforcement trucks, however I believe the intention came from the right place in trying to create a cultural symbol that represents us as a people”, said Linda Pritchett former District 7 candidate.

There are concerns surrounding the meaning for those who are left to interpret themselves especially to those who are seeking to invest or live in what we all project as an inclusive and diverse City. A corporation looking to locate in South Fulton will most likely have second thoughts when such overt symbolisms are presented as part of the brand of the city. The seal lacks inclusion and diversity which can hamper economic development activities in the city as culturally diverse business owners may view it as an affront to non-African American business owners i.e., large chain, large scale corporate employers with the ability to raise the earning potential of our citizens are likely to seek more welcoming
neighboring cities.

The seal could be seen as a violation of the City’s non-discrimination policies since it trumpets religion and pro-black sentiments. Not to 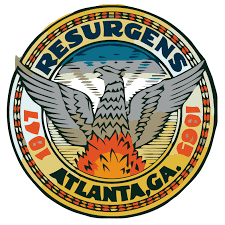 mention it can easily be seen as a deterrent for non-blacks and pose a legal discriminatory risk to the City. The use of the Swahili term Kujichagulia – Self Determination is mostly associated with Kwanzaa which on the surface may make a statement to the long struggle of the city. The vision for our city has reach beyond looking inward to identify who we are. Atlanta which is considered the most dynamic black led city in the world continues to proudly display its Resurgens Phoenix rising from the ashes as it brand.Before the seal is changed there should have been a complete branding package to go along with it. The forthcoming name change will most likely necessitate further changes.

What are your thoughts?

Mayor William “Bill” Edwards has vetoed the resolution. Under the current Charter the Council can override the veto with a 5-2 vote. If you want to have your say contact your representative. kGo to the CoSF website at http://cityofsouthfultonga.gov